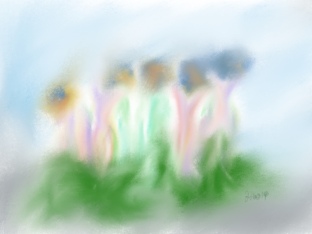 Not so long ago the word “dystopian” and “dystopia”, although around for centuries, was not used a lot in everyday conversations. Some years ago it increasingly entered popular use when talking about films depicting some sort of evil development in a future world, be it 10 years or 100 years or more ahead of our time.

I stumbled in my comprehension process of what my interlocutors were saying whenever they used this word. It took me time to get used to it. I never thought one would need a word like this one. Until I looked it up:

a very bad or unfair society in which there is a lot of suffering, especially and imaginary society in the future, after something terrible has happened;

I never really understood why are people so fascinated with dystopian stories? Why do we want to spend our free time experiencing our worst nightmares? The success of the series of films “Black Mirror” is a prime example for this development. But there are many more. What makes us want to bathe in negativity and despair? Do we feel we have to punish ourselves for something? Are we in love with our – real and imagined – misery?

I have the feeling that the attraction of dystopian stories and attitudes probably also lies in the fact  that we are not courageous enough for utopia, we seemingly prefer to extrapolate current potentially negative trends into full-blown future scenarios. Dystopia is the fashion, the way to be. Utopia is so “has-been” it seems.

I call on teachers and other educators to help make our students dream again, dream of a better world, picture a better world, dare to imagine and project potential positive developments instead of  wallowing in descriptions and complaints of negative aspects of current life and in self pity.

Support them in daring to think outside the box of conformism, even, and especially, when conformism has taken the shape of complaining about the present state of affairs. Dare imagining better ways of doing, dare proposing better ways, creating them and putting them to the test.

I want utopia back in our daily conversations as a stimulation to imagine and create a better world. It is still and will always remain a worthy cause. Let us go along with Victor Hugo or with Slavoj Žižek:

“There is nothing like a dream to create the future. Utopia to-day, flesh and blood tomorrow.” (Victor Hugo)

“… we should reinvent utopia but in what sense. … The true utopia is when the situation is so without issue, without the way to resolve it within the coordinates of the possible that out of the pure urge of survival you have to invent a new space. Utopia is not kind of a free imagination, utopia is a matter of innermost urgency, you are forced to imagine it, it is the only way out, and this is what we need today.” (Slavoj Žižek) https://vimeo.com/7527571

Imagining utopias as a concrete tool to solve the challenges we face in a constructive and positive way instead of getting stuck in repeating the hopeless “more-of-the-same” type of solution (Paul Watzlawick : Change. Principles of Problem Formation and Problem Resolution.)

2 thoughts on “The fatal attraction of dystopia”

It’s time for you to take your time, lest time will take you well before your time

Education to the power of 3

Learn to Change is an international organisation that provides learning opportunities for personal and professional development.